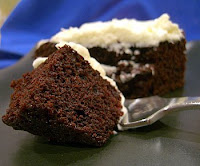 OK, this post owes massive thanks to my friend Jackie, who brought the recipe for Wacky Cake to my attention a few months ago. She told me and told me how easy and fantastic it is, and I guess I just felt that the recipe looked a little...lackluster. You probably will, too, and there's a very good reason for that. This recipe was developed during the Depression so people could still have cake even though they didn't have eggs, butter, or dairy products. Or, it was the result of wartime rationing, during World War I. Or during World War II. Or, between the two wars.

Whatever the case, inventive cooks at some time created something marvelous with limited ingredients, and so it is simple, super-easy to prepare, and VEGAN. In today's turbulent economic waters, who wouldn't like to give this little Home Ec gem a run around the park?

Also, it has SCIENCE: The last-minute combination of vinegar and baking soda acts as leavening. The reaction between the two causes the batter to bubble vigorously, and thus, rise!

1/3 cup cocoa powder, I used a little Dutch-processed and a little regular cocoa

1 cup cold coffee, or water, if you don't have any leftover coffee from this morning. If you use water, you might reduce the sugar a little. Or not. The recipe is pretty forgiving.

3. Bake until toothpick inserted in center of cake comes out with a few moist crumbs attached, about 30 minutes. When I did this today, 30 minutes was exactly right.

This was SO EASY TO MAKE. AND SO DELICIOUS. The texture is very light, even with the applesauce, but the cake was also very moist and delicate. I don't know if my pictures adequately express this wonderfulness. 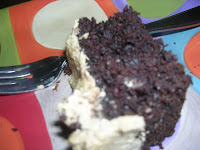 I made some coffee-flavored vegan frosting (recipe below) and the combination was amazing. Even though, y'know, the frosting flies in the face of the scrimpy-savey simplicity of the cake. But it also rules, so I say go for it.

Stick it all in a mixing bowl and beat it (with a mixer or a whisk) until fluffy. You might need to add a little more soy creamer or a little more confectioner's sugar to get the consistency just right.

Then, it's pretty self-explanatory. You either sit down with a bowl of frosting and a pan of cake and a spoon, or you go ahead and wait until the cake cools and use some sort of kitchen utensil to spread the frosting ON the cake. I think either would be perfectly satisfactory.
Posted by Bundle Brent at Friday, May 23, 2008 No comments: 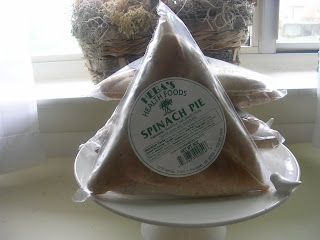 I have recently discovered these little spinach pies made by Heba's Health Foods. I. Love. Them! They're little turnovers filled with spinach and onions, no preservatives or animal products, nothing but delicious perfection. I like to toast them, top them with a little hummus and tabouleh salad, and eat them for lunch. Every day.

Heba's is apparently located in Manassas, Virginia, but they don't have a website. I have seen their delivery van on the beltway a few times, and I have considered trying to hijack it. I don't think there's a restaurant, I think they just make a few middle-eastern food items and sell them at a handful of area health food stores. And probably also in heaven.

In today's difficult economic climate, it is always worthwhile to find out if it might be more cost-efficient to learn to cook something oneself. So I Googled around for spinach pie recipes. The Heba's-style pie is evidently based on a popular middle-eastern street food called "Fatayer Sabanegh" (that means, "Spinach Pie"), and there are indeed some recipes for those which I may eventually try. But in the course of my journey, as so often happens, I discovered many other wonderful variations on my original objective, and I decided to try a vegan version of some of these.

So today, I give you, (Vegan) Spinach and Chickpea Pie! This turned out so beautifully and is so delicious. I didn't take any step-by-step photos, which I regret, because the crust is really not confidence-inspiring during the preparation phase, although it came out marvelously well. I will try to be more diligent with the camera in the future. 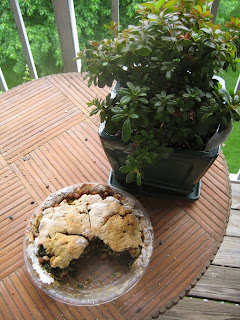 Method
To make dough: Combine flours, baking powder and old bay in a large bowl. Rub in Earth Balance until flour mixture looks like peas. Add yogurt and milk and stir with a rubber spatula until just combined. Flour your hands and gather dough into a ball. Wrap in plastic and refrigerate for about one hour.

In a large skillet, heat oil over medium heat. Add onions and cook until soften and slightly golden but not burned, about 10 minutes. Add garlic and stir to combine. I had some leeks, so I added a couple leeks, too.

Add chickpeas, vinegar and molasses, turn heat to low and cook for 15 minutes. Stir in salt or Old Bay, plus pepper to taste. Set aside.

Steam spinach until just wilted and drain in a colander, pressing out as much water as possible. Coarsely chop spinach, place in a bowl, season with 1/2 teaspoon salt and pepper to taste. Add tofu, half of nutritional yeast and toss. I used some baked & seasoned tofu from Heba's; if you have a recipe for tofu ricotta, that would work, too.

Remove dough from refrigerator and dust work surface with flour. NOTE: Dough is really sticky. Keep hands floured, too. Cut dough into half and work with each half one at a time. With your hands, press dough into a 10-inch circle, then carefully lift into prepared pan. Press dough into bottom and trim off excess if necessary.

Spread spinach mixture over dough. Top with chickpea-onion mixture. Roll out remaining dough and lift onto top and pinch crusts together to make a seal. Make small steam vents on top crust with the tip of a sharp knife.

Bake until crust is brown, about 30 minutes. Do not overbake, as results will be dry. Cut into wedges and serve.

I also made tahini sauce:
a few tablespoons of sesame tahini thinned with a little water and,
a tablespoon or so of Ken's Balsamic Vinaigrette.

I served the pie with salad and rice-filled grape leaves, and the tahini was yummy on all of it. 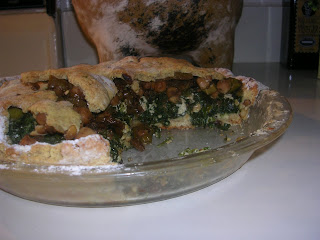 The crust is light and and delicate, very fragile, but savory and rich-tasting. I was a little surprised, because it seemed so heavy and sticky while I was prepping it. My intrepid omnivorous companion said it was "Good!", and when asked to elaborate, added, "Flaky crust good", and after a few minutes, "Creamy sauce good" (I presume he means the tahini sauce, which really was good. Kudos to Ken's dressing, even if it does owe its existence to a steakhouse).

I also think that this recipe would lend itself well to modification. Curried lentils instead of chickpeas, or swiss chard instead of spinach? Serve it with warm tomato sauce and vegan parmesan?
Posted by Bundle Brent at Sunday, May 11, 2008 2 comments:

I read this article, which was a bit of a surprise to me...it's from a mainstream sports reporter, and yet it seems to call into question the way animals are arbitrarily commodified, particularly in horse racing, and specifically in light of the tragic death of the filly Eight Belles at the Kentucky Derby. The only issue I have with the article is that he seems to think the universal condemnation of Michael Vick, after he tortured and murdered several dogs, had to do with a kind of general social need to feel superior. So...what? So people only care about animals because it offers us an opportunity to feel superior? That seems nutso to me.

That "moral superiority" question comes up a lot in discussions of veganism, and I think it's a moot point. Sure, if you're an ethical vegan, you're acting on an ethical and moral principle, and that's very admirable. Are all vegans morally perfect in every other respect of their lives? Of course not. I don't know a single vegan who was motivated to action by a need to feel superior. For the most part, it seems to be about health, because caring about animals smacks of "caring" a little too much for people of my generation. But many of us really do care about animals. Especially if we are capable of thinking. And reaching conclusions in the process.

OK, that was snotty. But I'm not sorry! See? Unrepentant snottiness! I'm not morally perfect!

I really thought people were outraged about Michael Vick because he was engaging in a totally despicable activity which hurt and killed a lot of dogs. I think people are often powerfully affected by the mere sight of a horse, and seeing them in agony from a racing-related injury legitimately affects people on an emotional level. I also think that once the initial shock of notorious incidents like Barbaro, Eight Belles, Michael Vick, or the Hallmark Meat Packing plant fades, people are confronted with some pretty uncomfortable questions. About animals, and their rights, and whether we should be doing what we're doing to them.

Anyway, I think horse racing should be stopped. Also, dog racing. Also, meat-eating, and puppy-kicking, and animal testing, and egg-stealing, and bee exploitation. And cockfighting. And all other forms of animal exploitation. *sigh*
Posted by Bundle Brent at Monday, May 05, 2008 No comments:

Links to Vegan Resources on the Web!

1) I have known too many wonderful animals (including so-called "farm" animals, like cows, chickens, pigs, horses, etc) to condone eating them, causing their suffering, or indirectly supporting those who perpetuate animal suffering. Even if I hadn't known any personally, it's still senseless to treat animals as property and resources, and to deny their sentience.

2) I find my vegan diet healthier, less expensive, and more enjoyable than any omnivorous diet.

3) I think factory farms, which constitute the largest source of all animal products, are evil. I have seen them. I think their continued existence is morally indefensible. Unfortunately, partaking of almost any animal product (this includes meat, dairy, leather, fur, wool, gelatine, some glue, and many, many more) probably supports factory farming.

I live with an omnivore but I'm hoping to have a good influence on him. I am like the sea: what I cannot sweep away with force, I will slowly erode with time. Mwa-ha-ha!